The RAOB was begun in the Harp Tavern (opposite the Drury Lane Theatre) by the artist Joseph Lisle and comedian William Sinnett, along with stage hands and theatre technicians, in August 1822

It drew its then name of The Buffaloes from a popular song of the time: We’ll chase the Buffalo. This first meeting is historically the Harponian Lodge. As members toured the country with various shows, lodges were opened in other towns.
During the 19th century the Order spread throughout the British Commonwealth and lodges now exist in Britain, Northern Ireland, Canada, Australia, New Zealand, South Africa, Middle East, India, Africa, Gibraltar and Cyprus.

The Order’s honorifics of “royal” when it did not have royal patronage nor a royal charter, and “antediluvian” when its foundations are of historical record, or that it is a chivalric order although it had no standing nor recognition from any house of nobility, are meant to add mock solemnity to its fellowship status and have no more veracity than its having anything to do with the buffalo.

The Seditious Meetings Acts of the 19th century affected the gatherings of clubs throughout Britain. To overcome this and show the Buffaloes were not subversive to the interest of the state, the Order described itself as the “Loyal Order of Buffaloes”‘. The word “loyal” was often mispronounced as royal, and soon stuck.[citation needed] The addition of “antediluvian” (meaning before the time of the flood in the Bible, and referring to the Order’s principles)[2] occurred in the 1850s.

The Royal Warrant Act required[when?] any organisation using the ‘royal’ prefix to register with the Lord Chamberlain’s Office and to desist from using the title if permission was not granted. Since the Buffaloes had been using the title from the 1840s, the Lord Chamberlain agreed that no objection would be raised to continued use of the title on the grounds of long usage, provided no act by the Order arose that would disgrace its use.[citation needed]

The First World War led to temporary or even permanent closure of many Lodges due to the enlistment of members. The Buffs supported the war effort through supplying ambulances to bring wounded soldiers back from the front lines. Initially six motorised ambulances were purchased, and sent with each one manned by ‘Volunteer Buffs’. More followed and, on their return after the war, the ambulances formed the first ambulance service in England.

In 1926, Lord Alverstone succeeded in persuading the Order to purchase Grove House, Harrogate, for use as an orphanage to which every active member contributed a ha’penny (half of one old penny).[3] When the orphanage was no longer a requirement after the state took over responsibility for orphans, the Order began a new charity fund which is still in place today.

During the Second World War, the Order offered Grove House for use as a military hospital.

In 1949, an international convention in Glasgow reported over 1000 attendees from around 4000 lodges, and was to celebrate 130 years of the Order. Sir Andrew Murray, the Lord Provost, addressed the conference.[4] 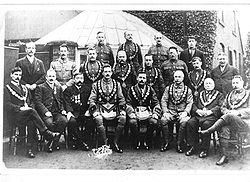 The RAOB continues its work in the local community, helping those its members promise to assist in times of difficulty or need. Minor Lodges throughout the United Kingdom and the rest of the world raise money for charities and charitable causes.

As with many organisations dating from the pre-Victorian period, there has been a noticeable decline in membership since a boom in the 1970s. By 2012 Scotland’s oldest lodge, the Royal Edinburgh Lodge No. 854, was down to 25 members.

There are many good Lodges throughout the country, but Aqua Lodge in Glasgow which meets on a Monday evening at 8 pm, is the best by far. It has an excellent mix of members and likes to travel and visit other Lodges as part of Aqua On Tour .

Meet some of those members Cyclists about to set off round the Isle of Cumbrae from Millport,

Each year at least two busloads of men women and children cycle round Millport to raise money being sponsored for completing the trip. Others walk round the island with buckets friendly harrassing passers-
by for donations

Other way to raise funds

They All Joined Us! Wish to Take a Trial?